Metal pipes have been used and installed in fluid and gas applications since the mid-19th century. Metal pipes are strong, safe, and provide excellent performance for many demanding services. Plastic pipes are an alternative to metal pipes for many fluid applications. They do not have the same high-pressure ratings, but they are highly corrosion resistant. They do not rust, scale, pit or corrode. They are lightweight and easy-to-install, which make them an excellent choice for many liquid applications. Over the decades, users have learned that a plastic piping system, when properly selected and installed, will require very little maintenance and will offer many years of uniform service. Since thermoplastic piping is an ideal choice to transport fluids, how would plastic piping perform with compressed air? This article will focus on the suitability of plastic pipe systems as well as joining methodology in compressed air applications.

Polypropylene (PP) pipes can be unsafe in cold conditions without an encasement, as they become more brittle as temperatures decrease. ABS pipes, designed for compressed air, are available, but they are not compatible with all compressor lubricants, and they may fail due to use with a non-compatible lubricant. Fluoropolymer materials, such as PVDF and Halar, are cost prohibitive.

Polyethylene can be engineered to handle compressed air applications. It has excellent physical and mechanical properties, with broad chemical resistance. The material retains its ductile properties well below 0°F (< -40°F). If it were to fail, it would fail in a safe mode. This shatter resistant material would simply balloon and tear, keeping the pipe material intact. PE100 pipe and fittings can be joined through heat fusion, which is a type of melt-processing. Heat fusion joining brings two melted surfaces together and allows them to cool under pressure. This process produces one continuous piece, free of any foreign material or seams. The weld joint is as strong as the pipe itself. PE100 pipes and fittings are joined by socket or butt fusion. With socket fusion, pipe is inserted in socket fittings that have a slight taper; the tapered fitting increases the pressure of the pipe up to a stop in the fitting. The entire insertion depth is the weld area. Butt fusion fittings are the same inside diameter (ID) and outside diameter (OD) as the pipe for end-to-end fusing. Two pipes can be butt-fused together without a coupling. Butt fusion always produces an external and internal bead. The reliability and integrity of PE butt fusion welds is universally accepted. The natural gas industry has been using butt-fused PE pipes for underground gas utility for decades in the US. Asahi/America’s Air-Pro® pipe and fittings joined with non-mechanical butt and socket fusion methods, as indicated in the figure.

Understanding the way pipes are joined is important. Leaks are costly and wasteful. A ¼” orifice @ 100psi wastes about 104 cubic-feet-per-minute (cfm) and can cost as much as $10,000 per year. Joint leaks are a common cause of wasted compressed air energy. There are two joining philosophies to consider:

Why does the compressed air industry need both joining method options?

There are many facilities that require routine adjustment and re-configuration of their operations. Micro-breweries, custom machine shops and assemblers, as well as job-specific printing houses all need to break down and re-assemble portions of their compressed air system. In these instances, a system that incorporates mechanical joints is necessary. There are many high-quality aluminum piping systems on the market that provide the ability to assemble, disassemble and reassemble the system and maintain the system’s operating integrity while doing so. Of course, there are many installations that are more permanent, and once installed, are designed to stay in place for a significant amount of time. Manufacturing facilities often have central utility areas, where various services are fed throughout the plant. Compressed air is one of those. Here, a main trunk line (or lines) is permanently installed throughout the plant. This line is welded to serve as a fixed line.

In many instances, there are buried compressed air lines. Manufacturing campuses, military installations, heavy equipment manufacturers, rail and lumberyards, and theme parks are all examples of facilities with extensive underground installations, where leaks are an anathema. Here, a permanently joined, corrosion resistant system, like a PE100 homogenous fused system, would be ideal. Asahi/America’s Air-Pro® in a buried application at a railroad station.

Why does the compressed air industry need both metal and plastic pipe options?

Most applications have varied system requirements and one size can’t fit all. Even in the applications mentioned above, a system with a permanent trunk line may have numerous drops and require those drops to be adaptable to tool changes. Therefore, it could be said that mechanical and non-mechanical joining and metal and PE100 pipes are necessary to handle the varied requirements of compressed air applications.

The chart above illustrates that both metal and PE100 piping systems have some limitations, which are marked as “NO” or “limited life”. Yet both options would probably handle the majority of real-world applications. For those applications, cost of ownership, ease-of-use and system flexibility, elimination of leak points, and service life must be taken into consideration.

Compressed air consultants need to have both mechanical and non-mechanical piping options as well as metal and PE100 options to meet the needs of their clients. Since PE100 can be joined to metal systems by mechanical means, a hybrid system with both metal piping and PE100 piping would be possible; indeed, some might call it, “the best of both worlds.” 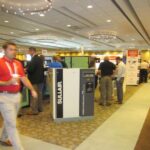 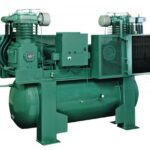